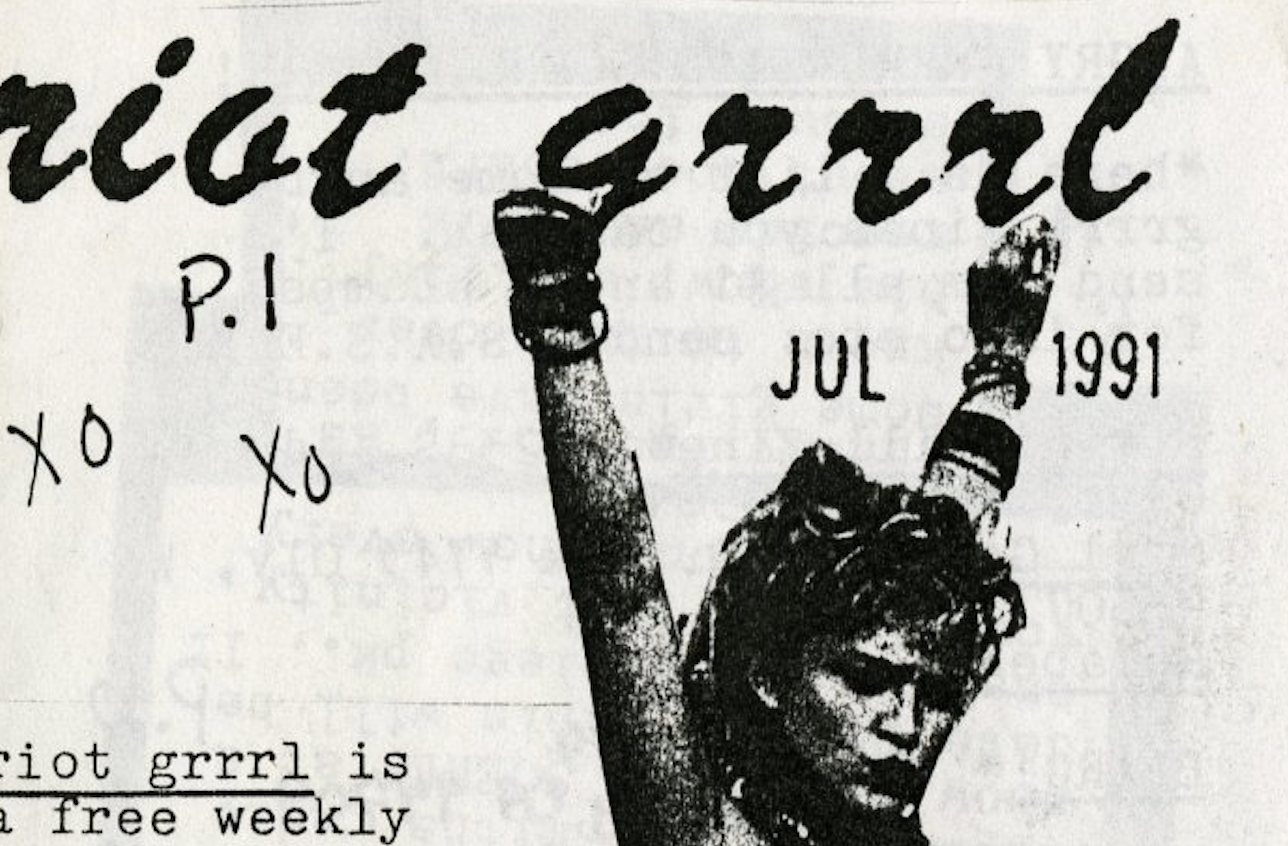 In the early 90’s in the North-West of the United States, a group of women would come together and create bands and zines, and change the way women related to music, and more specifically punk music, forever. This movement is known as Riot Grrrl. The mis-spelling of girl is a deliberate etymological choice to indicate the female anger fundamental to the movement.

The gender dynamics of punk at the time was a wave of men with guitars, with women relegated quite literally to the sidelines, and with no women to look up to. The atmosphere was violent and aggressive and for a community that was supposed to offer a respite from society, women and girls found that there was nothing there for them. What the Riot Grrrl movement did was to inspire, act, and show women that the drama of punk could be their drama. That they too, could write their own songs and their own rules. Zines were another large component of the movement, and as it was pre-internet, the zines also served as a way for women to connect with each other, and connect their anger at the way women are treated within a broader social context.

Riot Grrrl was also revolutionary as the songs spoke quite explicitly about women’s anger related to their oppression. The lyrics explored topics like rape, incest, the patriarchy, and sexism. It was women “doing stuff on their own terms” and leading the way for women to recontextualize their place within the creation of music.

The start of Riot Grrrl mainly consisted of 3 bands, Bratmobile, Heavens to Betsy, and Bikini Kill. Riot Grrrl does not have an official “leader” as the feminist philosophy underpinning it refuses to adhere to hierarchal power structures.

The originators of the Riot Grrrl movement blended a punk rock ethos of “you can do anything” with feminist theory. They wanted music that spoke to them, to stop feeling censored, and to define their own standards. They wanted to become a part of the music scene and not just women standing to the side holding onto men’s jackets as living breathing coat hangers.

These women came together under the banner of Riot Grrrl to address and counteract the misogyny that permeated the DIY and punk scenes. They performed a mix of “Poetry, hard music and feminist manifesto.”

Riot Grrrl created a focus on women specifically as creators of music, and women’s experience in the broader music culture. Riot Grrrl called upon girls to participate in feminism while the DIY ethos made music seem accessible, that they too could be creators of music and definers of culture.

Preceding Riot Grrrl was the beginning of the women’s liberation movement, also known as the second-wave of feminism, which emerged in the late 1960’s. This was a major consciousness raising effort led mainly by academic women such as Betty Friedan, Andrea Dworkin, Mary Daly and Germaine Greer that changed women’s perceptions and gave them a new understanding regarding their lives, careers and marriages. The women’s liberation movement educated women how their life was not the result of individual failings but a collective and systemic oppressive regime known as the patriarchy. It was this philosophy that became the foundation of the politics of Riot Grrrl.

Just prior the emergence of Riot Grrrl was the 1989 Ecole Polytechnique massacre, where a gunman walked into an engineering school, told the men to leave the room, and opened fire on the women, killing 9. He declared his motivation was “fighting feminism.”

The political landscape in 1991, when Riot Grrrl began, was heavy with attacks on women’s rights, and women’s issues were at the forefront of people’s minds in United states.

The then president George H.W. Bush had sworn into the supreme court Clarence Thomas, who had been accused of sexual harassment by Anita Hill. The Supreme court would go on to uphold a gag rule, preventing employees in federally funded family planning facilities from even discussing abortion with their patients.

That year also saw William Kennedy Smith of the Kennedy family be acquitted of rape in a highly publicised rape trial, although three women also testified that he had sexually assaulted them in the 80’s.

Also in 1991 in Mount Pleasant, a police officer shot and killed a man, and the surrounding community began a riot. Around 400 youths fought with police in the streets, lasting for several hours late into the night. This was the Mount Pleasant riots, and a woman named Jen Smith wrote to her friend Alison Wolfe “We need to start a girl riot”.

Alison and Jen would go on to form the band Bratmobile.

Meanwhile Kathleen Hanna was writing a zine called Bikini Kill, and after one of her artworks were censored at the college she attended, she started an art gallery in order to showcase her and other women’s work. In order to fund this, she would host band nights at the gallery, and got a front row seat to the music scene of the time, which was DC Hardcore.

DC hardcore was a more extreme version of punk, with an emphasis on masculine aggression and playing louder, harder and faster. In nearby Seattle, grunge was taking off, also dominated by men, and it seemed like everywhere she turned, it was boys on stage and women to the side. This is what inspired Kathleen Hanna to begin her own band, Bikini Kill.

Riot Grrrl influenced women and girls to pick up guitars and scream. Girls started their own bands in unprecedented numbers. Women and girls were now able to feel they had a strong investment in the music, as opposed to being passive consumers. Music was now for everyone, not just the most skilled or the most macho. Riot Grrrl debunked the mythology of the unattainable “Rock Star”. Women and girls became involved in the production of zines, and girl-led zine distribution networks emerged that allowed zines produced in Olympia and D.C. to travel across the country and beyond. Women were now unapologetic about their feminist views.

This led to Riot Grrrl conventions and workshops at those conventions were about how to make zines, buy guitars and how to fight sexism in the community. Girls became purposeful in supporting each other and speaking truth to power.

Riot Grrrl was a network that allowed each participant to create cultural products relevant to her life experience. Women and girls were encouraged to take control of the means of cultural production.

The feminist critiques of the punk scene meant that male misogyny would no longer remain unchecked. Women would go to shows together and dance right up front. Some men responded with hostility, while other men supported them. Kathleen Hanna’s call to bring the ‘girls to the front’ was initially about bringing the women in the audience to the best seats in the house, but it ended up serving the duel function of not only benefitting the female audience, but it also created a buffer zone around Kathleen and the band so that male hecklers were not too close. It made the punk scene feel safer.

Media representation of Riot Grrrl was a mixed bag, depending on who was publishing, which eventually led to the participants of Riot Grrrl to call a media blackout. Some media understood that Riot Grrrl was about returning power into the hands of the individual girl or woman, while other media either derided them as too militant, or sought to dismiss the seriousness of the movement by focussing on the fashion and looks of the women involved.

How did Riot Grrrl impact the world?

In the early 90’s, feminism was largely in the domain of academia. The women’s movement didn’t have language for reaching young women. The language and ideas of Riot Grrrl permeated the culture outside of academia and made feminism more accessible.

Riot Grrrl also revised standards of women’s behaviour in the punk scene. Women were previously held to male standards of what was cool, which for women included being pretty, cute, nice and accommodating. However, Riot Grrrl gave women not only permission, but incentive to become what was cool to other women, which was being loud, demanding, and taking up space. It gave women courage to do things she had previously felt she “wasn’t supposed to do”.

The zine side of the movement was a way to make visible the inner dialogue of a woman, to talk about how politics were affecting her life and to break the silence of the sexist oppression she was dealing with.

The impact of the Riot Grrrl movement lives on, with it being instrumental in the establishment of girls’ rock camps such as the Willie Mae Rock Camp in New York (where Kathleen Hanna mentors) and Portland’s Rock’N’Roll Camp for Girls.

Women and girls still to this day struggle to see themselves in the music industry, and with the advent of the internet, we have more interconnectivity than ever. Riot Grrrl still inspires women and girls to have the audacity to create and share their art unfiltered. Music production technology is now in the palm of our hands, with the garage band app in most iPhones, and both free and paid music production software a mere click away.