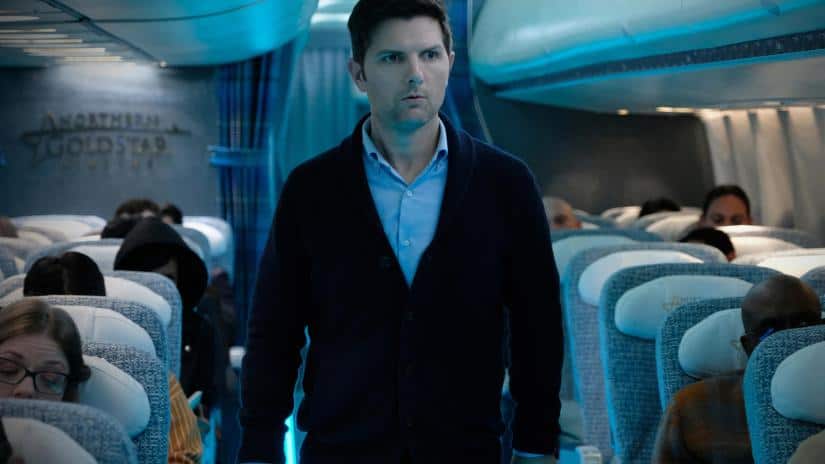 I have been holding off on writing my reviews for the 2019 Twilight Zone reboot because several episodes makes me extremely emotional and watching them in the midst of the pandemic just seemed overly taxing to deal with right now. So I decided to pick an episode that didn’t really resonate with me upon first viewing, and do a deep dive into the mechanisms behind the story telling. I went with Episode 2 of Season 1 of the Twilight Zone reboot – ‘Nightmare at 30,000 Feet’.

Most fans will immediately recognise the nod to a prior, and rather famous, episode of the Twilight Zone – episode #123 “Nightmare at 20,000 feet.” Originally aired in 1963, it was also remade as one of the shorts in the 1985 Twilight Zone film, where a terrified John Lithgow pleads with the rest of the cabin and the passengers on a flight to look out the window and see the gremlin on the wing that he can see.

‘Nightmare at 30,000 feet” once again sees us following a man on a flight, however this is where the similarities end. Justin Sanderson (Adam Scott) is an investigative journalist who finds a magical MP3 player in his seat when he boards Northern Gold Star flight 1015.

What is the Main Dramatic Question?

This MP3 player is tuned into a podcast called “Enigmatique” which is talking about flight 1015, the same flight that Justin Sanderson is currently on. Not only that, but the podcast episode is discussing the fact that the flight crashed. The podcaster (voiced by Dan Carlin) is investigating the events leading up to the crash, and at first Justin Sanderson is in disbelief so he unsuccessfully tries to get a fellow passenger to listen to the podcast. Failing that, Justin then decides as an investigative journalist himself, to save the doomed flight from its foretold fate.

Therefore that the Main Dramatic Question (MDQ) of this episode is;

“Can he save this flight”

The topic of civility is also in question in this episode, as evidenced by a prior interaction before boarding the plane, where a man is looking at a magazine that has Justin on the cover, and so Justin buys him a copy of the magazine – “In the name of civility”.

Civility comes from the Latin word civilis, meaning “relating to public life, befitting a citizen,” in other words, being friendly and nice to everyone. When you show civility, you use kindness and good manners. You are respectful, even if you do not like that person very much. Civility can also mean formal politeness, like your behavior at a fancy dinner.

Justin also fields a phone call from his partner, and on that call he apologises for yelling, blaming his actions on high stress levels. He goes on to quote a line from the therapy he is receiving “The Past is the Past.”

When Justin boards the flight, there is a passenger having seating issues, and Justin immediately offers that passenger his seat. This reinforces the theme of civility as well as the theme of interconnectedness and noticing the impact that we have on other people.

How do they establish the Main Dramatic Question?

The main dramatic question of “Can he save this flight” is initially established by the viewer first finding out that the flight is in danger, which we find out via the magical MP3 player that Justin Sanderson finds tucked into the pocket of the seat in front of him.

Justin then goes for a walk on the plane, trying to find the Air Marshal, and he comes across a couple of people who have their electronics on when they shouldn’t. They are also Sikh, and fearing they have been profiled for being Muslim, they loudly proclaim to Justin that they are in fact Sikh, not Muslim, and Justin’s concerns about the electronics interfering with flight technology is lost amidst socio-political tension.

The podcast then pivots Justin’s concerns away from technical issues, and onto social ones, revealing that there is a passenger who is in witness protection from the Russian mafia. Justin sees the same man who he bought a magazine for from earlier in the episode, and he asks him if he is the Air Marshal. Alas, Joe is not an Air Marshal, he is a pilot though, and he offers him clues as to finding out who the Air Marshal is.

The narrative is therefore dropping clues as to what Justin can do to save the flight as the episode moves forward, and we are following along, empathising with Justin Sanderson as the protagonist, and the only person on board armed with the knowledge that the plane needs saving.

What is the twist?

Justin Sanderson is running out of time. His podcast has told him that the last communication from the flight is at 11.30pm, and it is now 11.15pm. Justin has managed to harass enough people and become such a nuisance that the Air Marshal has him in cuffs. The Air Marshal, a Black Woman, offers Justin his last warning;

I had to go back a couple of times when I was watching this episode, as I struggled to understand exactly what the Air Marshal is trying to say to Justin. I think this is because the first time I viewed this episode, I missed the subtextual meaning of this episode that was about to be revealed.

Justin is now in handcuffs, his ability to save the flight diminished, when a last quarter saviour comes into play, and it’s Joe the passenger/pilot.

Joe comes over and sits next to Justin to tell him that he believes him. Joe believes that Justin is hearing about the future from an MP3 player, and Joe wants to help him. Justin realises that Joe is a pilot, whatever happens to the plane, Joe can fix it, because he is a pilot, and this means that Joe is the plane’s savour now! This exciting development is hampered by the realisation that they do not have the cabin code needed to be able to break into where the pilots are. But Justin has the answer. 1015.

10.15 is the flight number and also the number of episode on the podcast. Justin’s realisation that this is the code is a sort of serendipity, but it also functions to ensure it is in fact Justin’s input that saves the flight. In order to really clarify that this is Justin’s doing, Joe turns and says to him;

“The Past is the Past, you have given me clarity of awareness”

Joe advises Justin, wow thats a lot of J names isn’t it? Anyway, Joe advises Justin that he will drop the air pressure in the cabin, and that means the passengers will be unconscious shortly after the oxygen masks drop down, and he gives Justin a can of oxygen for himself, a type of oxygen ‘ark’ to this plane’s ‘Noah’.

Joe turns to Justin and says;

“You are doing a good thing – You are saving these Souls”

Joe the Passenger/Pilot to Justin

This is where it finally clicked for me, that this episode is a parable about organised religion. Justin – Joe – Jesus. That was my first clue. Then the oxygen tank – an Ark analogy. Then the talk about saving souls? Another clue.

Next we see that Joe has entered the cockpit, and he knocks out the pilots, and takes control of the plane. Joe turns out to be a homicidal maniac, and he intends to kill himself and everyone onboard.

This is the twist.

Justin is not our hero, he is our villain. The protagonist and antagonist are the same person. I can’t help but notice that the two people who colluded in this doom are white men, and the other people he antagonised were racially profiled, ethnically diverse, and the final warning is delivered by a Black Woman.

Does Justin actually know everything? Is Justin acting for himself or is he being considerate of his impact on other people? Even after he has been handcuffed, he doesn’t take even a moment to question himself. His actions from the start of the episode all the way through to the end of the episode, Justin blames on outside forces. It’s his high stress job that makes him yell at his wife. It’s the podcast that’s making him disturb other passengers.

This is how the last warning from the Air Marshal now makes sense, because the reality was that Justin was wrong, and if he is wrong, which he is, he could have adjusted his actions. It was after all, Justin who gave the homicidal maniac the key to the cabin. But Justin was too wrapped up in himself, and in the idea that he was being right, and it impacted everyone onboard that flight. Severely.

The religious parable motif is also reinforced when the passengers finally realise the plane is in dire trouble. A passenger screams “OH MY GOD”.

Does the twist subvert or meet the viewer’s expectation?

This episode definitely subverted the viewer’s expectations. As a viewer we were invited to empathise with Justin Sanderson, it was his story we were watching, and therefore we as viewers didn’t question him. Did we also not question him because he is white and male?

The viewer might also be expecting this episode to follow the titular reference – Nightmare at 20,000 feet – but that is also not the case. In that episode, the man is correct. There is something on the wing. We are not without our fan easter eggs though, and that comes right at the prologue of this story.

The debris from the plane crash is washing up onshore, and here it is –

We zoom out to the shoreline of this island to find out that in fact, Justin has survived! He’s on a deserted island now, and so is the magical MP3 player. He grabs it and listens to the prologue of the story….

The miracle of Northern Gold Star flight 1015 is that everyone survived! Everyone, that is, except for Justin Sanderson….and we cut to the other passengers of flight 1015, surrounding Justin Sanderson, as he yells at them “I tried to save us!”

That these are his last words cements the idea that this episode is a parable on religion.

The idea that a select few people are chosen and given life or death information, and then therefore other people around that chosen one are forced by moral obligation to listen to them, is a religious idea. And one that we have watched play out in our history in violent, horrific and completely barbaric ways. The reign of terror enacted on society by organised religion and its most is faithful disciples is wrong, it’s uncivilised, and it needs to end. This episode of The Twilight Zone closes with the people ending it, and Justin, collectively.