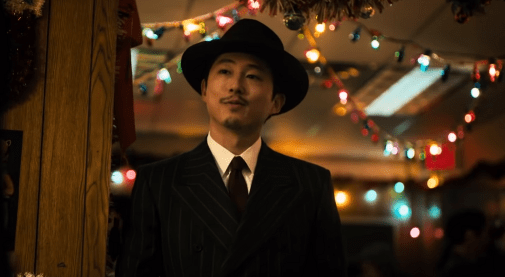 Episode 4 starts off with the Northern Lights, and a road sign that indicates you are near the North Pole, but even closer to Iglaak, Alaska. It is Christmas Eve, and we are in a police car with Jack, an Inuit man pulled into the police station on account of his inebriation. Jack is pleading his case to the police officer, a woman called Yuka, who also happens to be Jack’s sister.

You wouldn’t know it at first, because one of the words Jack uses as part of his pleading is “Bro”. Jack is also not overly happy that his sister has dragged him into the station, and fair call on that Jack. I’d be annoyed too. Jack criticises the story of the 3 wise men and we as the viewer a given a glimpse into the tension between Inuit Cosmology and Christianity.

Yuka bargains that she has only pulled Jack in to be the recipient of her bosses annual pardon, and Jack will get some Turkey and be sent on his way within the hour. Jack isn’t impressed, firstly because he really feels like pie, but mostly because the betrayal still stands, and it’s obvious that Yuka is prioritising her reputation with her colleagues over her standing with her brother.

I’m watching this exchange occur and wondering to myself – another Christianity Criticism episode? Okay, i’m down. Alas this was not to be. Yuka and Jack get to the station, and Jack is put downstairs in the cells. Now we meet Yuka’s boss, Captain Lance Pendleton (played by Greg Kinnear), who gives a big speech on how lovely it is that he pardon’s someone every year, and how it is to be nice to strangers. We are given a scan of the room when he says “We” indicating who the in-group is – (P.S. its white people). As Pendleton talks of giving kindness to strangers, we get another scan of the room, this time focusing on the ethnically diverse members of staff at the police station. All of these gave me clues as to what might be….the Main Dramatic Question.

What is the Main Dramatic Question?

So far in this episode we have been invited to consider the idea of In-Group versus Out-Group social dynamics. Who is “We” and who is “They”? It is clear that Yuka feels tension being an Inuit policewoman, torn between the direction of her boss and the loyalty to her brother.

Yuka is finally given the all clear to release her brother, but once downstairs, there is a new man in the cells. And this brings us to what actually is the main dramatic question of this episode.

This is where this episode starts losing me. You’ll see why in the 2.5 split seconds it takes you to finish this paragraph. The man in the cell gives his name. It is A. Traveler. *eye roll*. I’m sorry, but this is like naming your dog “Dog”. Can we not think of something more creative? Something a bit less.. I don’t know – obvious? Anyhoo, “A Traveler” has heard of the somehow famous Captain Pendleton and his annual pardon, and has travelled here to be the recipient. Captain Pendleton buys it hook, line and sinker, and we know why, it’s because he calls Youtube “The Youtube”. A Traveler reveals he is here as part of his YouTube channel, he is an extreme traveller, and this is an extremely cool thing to do…..apparently.

Okay so this is Season 1 Twilight Zone Reboot. It’s 2019. 2020 hasn’t happened yet. But still, I find it quite privileged that someone would think an ethnic minority would place themselves in a jail cell ‘For Fun’. I would hazard a guess that this was written by a white person. Let us see…

Anyhoo, back to the story. A Traveler is welcomed with open arms by Captain Lance Pendleton because Captain Lance Pendleton wants to look cool on The YouTubes. I have to keep writing “A Traveler” because that is the name that Glen Morgan creatively came up with, but I literally cannot stand to do it one more time, so from now on i’m calling him Ay. Ay comes upstairs and is impressing everyone with his ultra modern clear mobile phone that looks completely out of this world but is explained away by “the Russians”. Ay also impresses everyone with his cool hat and debonair demeanour, sings some karaoke and is just all around loved by the staff at the Christmas Eve party. Well, everyone except for Yuka.

How do they establish the Main Dramatic Question?

Ay popped up in the jail cell out of nowhere. That immediately makes the viewer question “where did he come from” but it is Yuka’s suspicions that make us question who he is. His phone is crazy looking. He’s wearing a suit and a hat. Is he really an extreme traveler? Will I ever get over the most uncreative name ever written in a story?

Yuka is just about to get her brother out from downstairs because in all of this fuss over the Super Cool Ay dude, her brother has been languishing downstairs all alone in his jail cell, and whats even worse is, Jack still has no pie. Ay stops her and the informs the staff that in fact, perhaps Jack isn’t deserving of the pardon. Jack might just be in the possession of the tools from the police shed, and a couple of cops should go and check that out before making Jack a free man. Ay then goes on to reveal a bunch of secrets about everyone in that station, and that also reinforces the question of “Who is he?” as well as “How does he know these things?”

Ay revealing all of the police staff secrets puts a swift end to the Christmas Eve party and to Pendleton’s generosity. Ay is put back downstairs in a cell until Captain Lance Pendleton can figure out just who this guy is.

What is the Twist?

The twist is that A Traveler is an Alien.

Does the twist subvert or meet the viewers expectations?

The fact that A Traveler is an alien is pretty clear from the start. So in my opinion, it meets our expectations. His phone looks like an alien phone. His name is stupid. And he has intel on humans which we all know aliens and Google have.

This story suffers from several issues, the first of which, the twist was not a twist. The second being, it tells us instead of showing us.

The fourth quarter tension is all about how Captain Lance Pendleton is actually a Russian informant, and this particular police station is tasked with guarding an airport facility power generator that is housed in a shed in Iglaak. Ay tells Pendleton that he knows if a hostile force wanted to invade, they would simply need to target the shed. This extremely pertinant information is practically whispered by A Traveller, and so on first viewing one could easily miss why Captain Pendleton suddenly rushes out the door.

Ay turns to Yuka and tries to recruit her to his side, commiserating with her that they are merely workers, not bosses (in/out group dynamics) and that there is always a “Bosses Boss”. Yuka considers it for a hot minute, but then decides for some reason that is either whispered or simply unclear, that she is now also headed out the door.

Jack, Yuka’s brother, who by the way was found to be innocent of the tool stealing accusation, wakes up in all of this noise, and A Traveler reveals his true form….of an Alien. Can you hear my excitement? Can you picture an expressionless face? The reveal is so obvious at this point that i’m slightly offended. I expect more. The viewers expect more. This isn’t the 1950’s Twilight Zone. “It was Aliens” is becoming as cliche as “It was just a dream!”

Yuko catches up to Captain Lance Pendleton at the shed and has her gun drawn. Because Pendleton is at the shed, Yuka knows that Ay was telling the truth about him being an informant. So Pendleton is under arrest.

It’s meant to be a show of her rising up to dominate against the oppressor, but by this stage I don’t care, I don’t know why she left her brother in the cell when there is an alien right next to him, I don’t know why she would bring him to the station in the first place, and I don’t think holding a gun at your boss is super empowering. Either way, this lacklustre scene is interrupted by UFO’s coming out over the sky. A Traveler’s mates are here to colonise Alaska, you don’t need to worry about white people or christians anymore, you have aliens to deal with.

Jack turns to A Traveler (last time I swear) and says “Maybe it would be better if you guys ran things” which to me just means that men would sooner see aliens run the world than women. Jack eats his slice of pie. I am left unimpressed. The end.

I think this episode shows us several things. That poor writing can still earn you a fantastic screenwriting career, if you are Glen Morgan. This was an attempt by a privileged person to examine what it must be like to be indigenous, a woman, or both, and to think about what those in the “out group” want.

2 thoughts on “A Traveler”